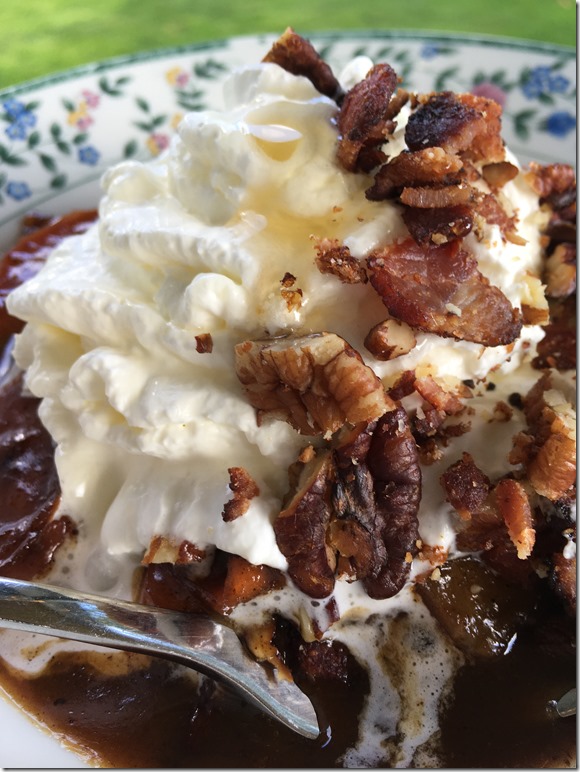 This is not apple pie.

It’s something that maybe is a little bit enough like apple pie to subdue a craving for the real thing. This is how I eat, when what I wanna eat is apple pie, and there is not a special occasion in sight to justify all that flour and sugar.

No I’m not going to write up some gay ten-page story about how I came up with the recipe and how much my husband loves it. But just so we’re clear, he fucking loves it. Okay?

Also, to be clear: you have to eat this while it’s still hot. Or at least warm. It’s made with gelatin as a thickener, which will set. If you don’t have plain gelatin in your house to add to soups and things like that… you probably should. I like grass-fed beef gelatin. The Knox stuff is smelly.

Here’s what you need:

1. Cook the bacon in a pan. I didn’t get a picture of the bacon in the pan, but you can see I cooked it nice and crispy in the picture below. Set aside to cool. 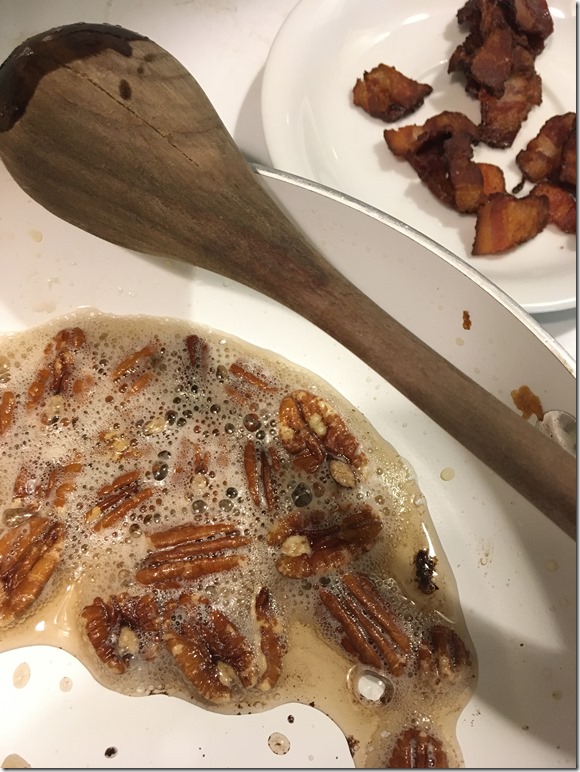 2. Toast the pecans in the bacon fat. Take them out before they burn! Lightly toasted is better than dark. They are delicate. In the picture above, they are done. Set aside to cool. Ooh, look: my stovetop is dirty. Dirty, dirty stovetop. 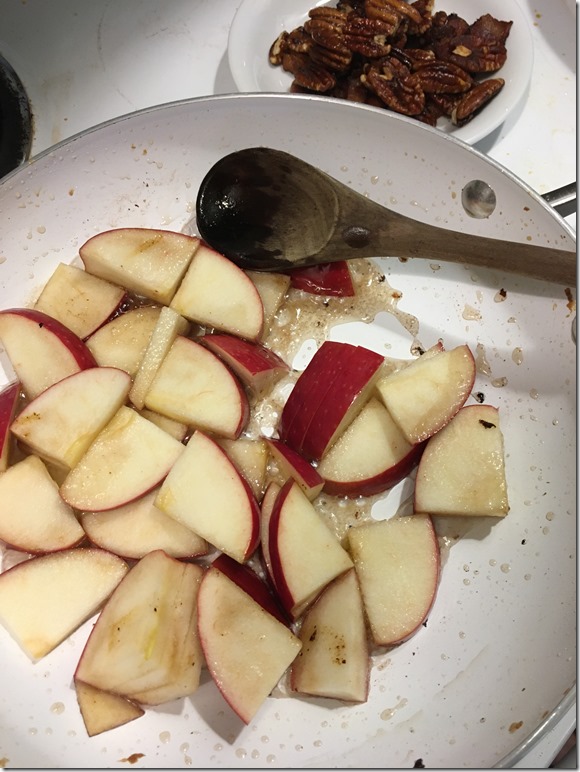 3. LEAVE ALL OF THE FAT IN THE PAN. Now cook the apples in it, with the nutmeg, cinnamon, and salt. Add a little water here and there and let them simmer until they get soft. 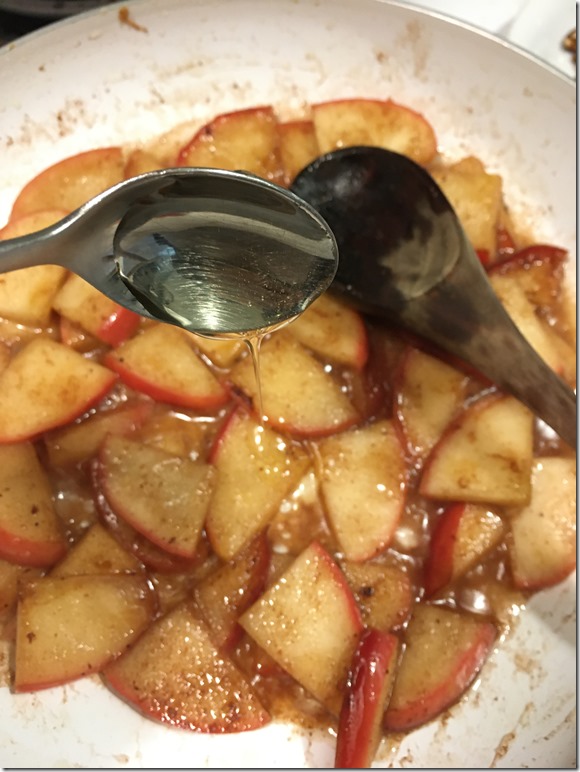 4. Add your little drizzle of honey. I guess this is optional if you’re a REALLY special snowflake who absolutely cannot have any added sweeteners ever. Let everything cook down and get a little caramelly. 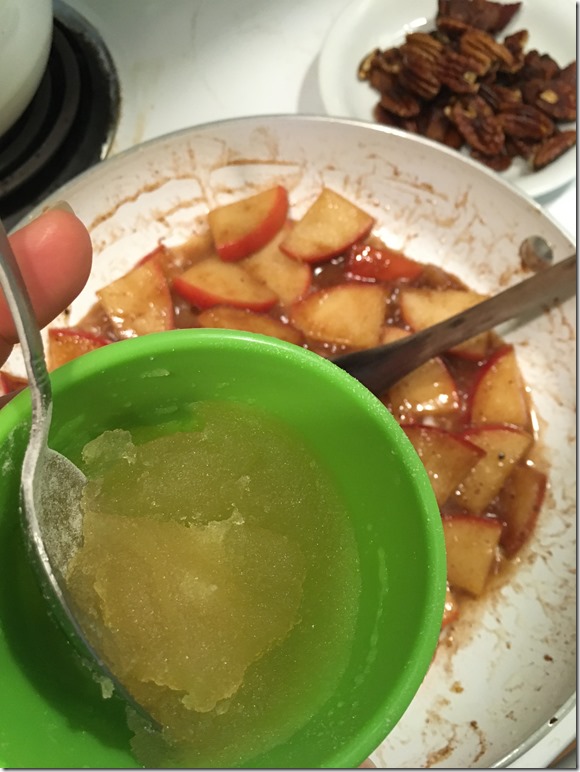 5. Add gelatin (pictured here mixed with water in a cup). Make sure you get any lumps out BEFORE you do this; it’s easy to work them out when they’re cold – not when they’re hot. You don’t want hard lumps of gelatin. Keep cooking until the gelatin is completely melted and the sauce is nice and thick. If it seems too thick, add a little water. Think “syrupy.” That’s when it’s DONE. 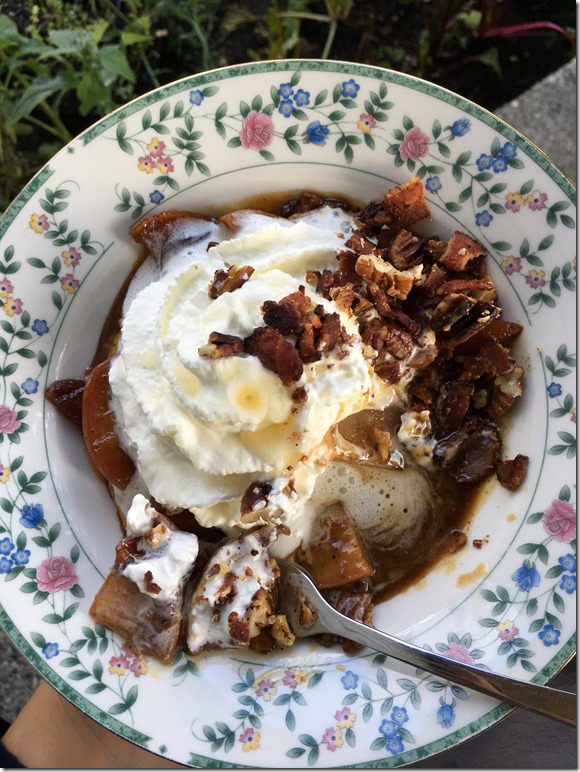 6. Dump that mess in a bowl, top it with heavy cream (I like mine whipped, always unsweetened), chop up the bacon and toasted pecans and throw those on there too – and if you can handle it, drizzle just a tiny bit more honey over the top. I drizzled half a teaspoon in while cooking, and another half teaspoon at the end.

Note about cookwear: I used my brother’s shiny new nonstick pan for these pictures, because it kinda shows what’s going on with the colors of the things – but I don’t generally recommend nonstick pans. I would typically make this in my big cast iron skillet, and I like that a lot better. Those newfangled nonstick things are so lightweight, they slide around all over the place when you try to stir what’s in them.